DEMONSPELL, or, Curse of the Everlasting Relatives

DEMONHOLD or Blight of the Deadly Demons Book 2

DEMONPRICE or Demonprice, or, Doom of the Penultimate Husband   Book 3

DEMONFIRE, or, Charm of the Killing Cousin  bk4

DEMONBRED or Decay in the Family Tree Book 5

DEMON OUT, or, Gift from a Bodysnatcher  Book 6 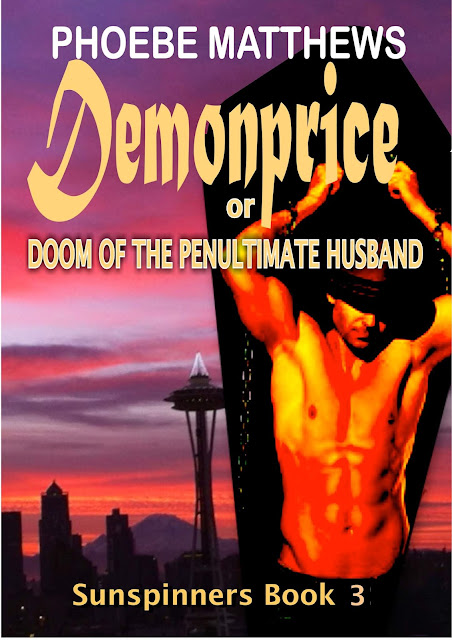 Copyright © Phoebe Matthews
Cover Design Copyright © LostLoves Books
Around us a red haze glowed. A couple of large males came over. One grabbed me by my arms. The other grabbed Charley. Their hands were burning hot, as though they had high fevers. Their faces matched, red and sweating. They dragged us across the burning floor and around a wall of flames to a room with actual walls, solid walls that looked like flame but can chains be bolted into flames? Hanging from the walls, their arms overhead, their wrists in cuffs, were four men, one young, the others old, all of them dressed in sweat drenched slacks and shirts. They looked like models for The Scream.
Charley complained and I did a lot of whimpering. Ignoring us, our captors pushed us against the wall and snapped metal cuffs around our wrists. There is something about having my arms manacled above my head that I don’t like at all and for the life of me I cannot imagine why anyone ever considers handcuffs a fun part of sex play. But at least they left us standing. The four other prisoners were dangling from their cuffs, their feet not touching the floor.
I turned my head and looked at Charley, who was a mess with a line of blood running down the side of his face, and I raised my eyebrows in question. He gave me back the same expression. I would have been more worried about his injuries if blood hadn’t been dripping slowly from one of my elbows and both of my knees.
A blast echoed around us and the flames shot higher. I shrieked right along with Charley and the four men. Intense heat flashed. I felt like I was being barbecued. Fire roared up the walls, spitting sparks, turning the room into an inferno. When I opened my mouth to scream, smoke burned my throat.
Charley croaked my name. I croaked back between coughs and sobs. About the best I could manage was to stare at him through a film of tears.

CHAPTER 2
As happens continually in my office and tosses me straight into reality, the desk phone did its loud ring. Sometimes when the phone rings, I am not sure it is a good invention. Who this time?
Charley’s voice circled me. All I could see of him were his jeans walking around the room. He does that, paces, hangs around, waiting for me to do something to add interest to his life. After three centuries he gets bored with trying to amuse himself. “You could let the answering machine get the call.”
Sounded like a good idea. We had both had a long night and this morning I needed time to catch my breath, try to think. I sat at my computer staring at the jeans. They stopped walking and perched on the edge of my desk. I hoped the caller was a normal interruption, like, say, a telemarketer. I flipped on my email.
After the beep there was a row of coughs on the answering machine that must have hurt, separated by low moans. I was so startled, I deleted an email from SNorris and opened LLBean. Staring at a row of parkas in a rainbow of colors added to my confusion.
“What the hell?” I said and felt Charley’s hand on my shoulder.
A weak voice said, “Miss Royal? They lied. They said...they said...they said you were with Mortviner.” The voice stopped to cough again. “Said you were...one of...demon possessed. Lied about everything. If you’re home...I need to talk to you...” A low guttural sound followed, something that meant nothing to me.
Charley said, “Good lord!” and jumped from the desk, ran out of the office and down the hall. I heard the front door open.
“Who is this?” I grabbed the phone and punched it on. “Who is this? Who is this?” I demanded into a dial tone. The answering machine had cut off, or else the caller had. The voice was familiar but who? I couldn’t place it.
Which narrowed my options to following Charley. His jeans lay in a heap by the open door. When I looked out through the screen, I saw a white Caddy parked at the curb, large and expensive and fairly new, not a car I recognized.
“Charley?” I didn’t shout because I didn’t know what was happening.
The front passenger door opened by itself, then closed. So that’s where Charley was. Or had been. Automatically I looked up and down the street in case a neighbor was out front in a garden. Most of them use garden services that arrive in trucks. The yards were empty and there weren’t any trucks at the curbs.
“Need help?” I couldn’t see anyone in the car. Why was Charley snooping in someone’s car?
The screen door opened and I stepped back to let him walk by me, felt the little cloud of warmth that seemed to always surround him. “It’s that man, Zane. He’s in the car.”
“What?”
“Dead,” Charley said. “I’m surprised he lasted this long.”
=======================
DEMONPRICE  book 3  $2.99
http://www.amazon.com/dp/B006WAG862